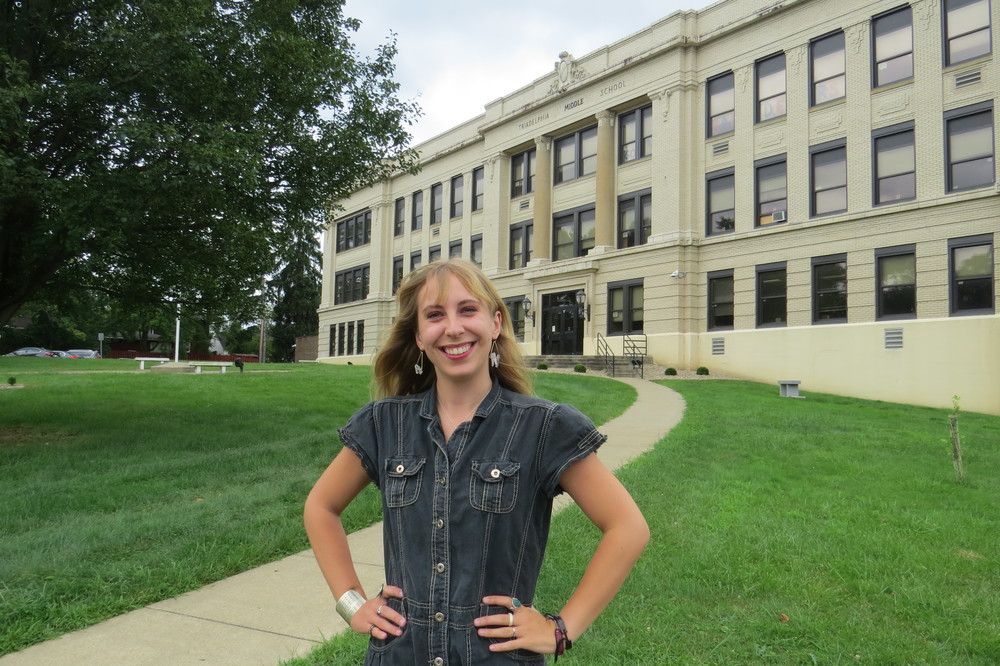 Living in The Netherlands, Brossman Still Has Fond Memories of Triadelphia Middle School

Betsy Brossman believes the life she is living today in Europe was made possible by the lessons she learned and the educators who inspired her at Triadelphia Middle School and Ohio County Schools.

Brossman graduated from Wheeling Park High School in 2017. In 2021, she earned her bachelor’s degrees in journalism and technology/emerging media from Fordham University. She earned her master’s of media studies degree in new media and digital culture from the University of Amsterdam in 2022.

Brossman lives in Amsterdam, Netherlands. She is a communications intern at ARIAS, which specializes in collaborative research between the arts and sciences. She’s also a volunteer at “Z!” the Amsterdam street paper. It is an exciting time in her life, and she is making the most it. Brossman recently walked 155 miles alone from Portugal to Spain.

Brossman said Amsterdam is one of the most diverse cities in the world, and it invites ideas and cultures of all kinds to meld into a vibrant metropolis. She said living in The Netherlands is a unique experience.

“I try my best to take advantage of all the Netherlands, specifically Amsterdam, has to offer,” Brossman said. “The entirety of the country is very focused on the environment. I ride my bike everywhere I go, and I frequent local markets to purchase vegetables or fruits. The country is known for its directness, open-mindedness and overall orderliness. There are opportunities for all, and even though I am living within the Netherlands, Amsterdam still provides an atmosphere of something that feels so much bigger. I now have friends and colleagues from all around the world, and that is something truly worth celebrating.”

Brossman returned to Wheeling this summer, and being back in her hometown made her feel nostalgic. Seeing Triadelphia Middle School brought back special memories for her.

“It may seem bizarre that, here I am, a 23-year-old, reminiscing on her days in middle school, but as I returned to Wheeling, I found myself physically faced with the old buildings which shaped the continuation of my life,” Brossman said. “In middle school, there are a few things that come with the territory. Who is going to wear whose football jersey on game day? How do I tell someone I like them? How do I make new friends? Among these very normal questions and worries that echoed in my brain, Triadelphia also allowed the space for me to grow into a person

who recognized that life is made up of so much more than those temporary worries.”

Brossman said she has fond feelings for Triadelphia Middle School because she quickly learned how much her teachers cared for her. She knew that the school’s staff members had her best interest in mind, and they created a safe environment for her and her classmates. Brossman also is grateful all of the opportunities made available to her at Triadelphia.

“I was far more than just a number at a desk,” Brossman said. “They took the time to get to know me personally and developed their job beyond only teaching. This is not to discount their teaching, though. A few of my fondest memories include doing a history project to paragraphs of the song “We Didn’t Start the Fire” and writing a mini-biography about Harry Houdini. I progressed to Wheeling Park High School with more than enough preparation to succeed in the classes of my choosing.”

“TMS offers it all,” she added. “I had constant sports practices, but I expanded my true passion in the old Annex. It was there that I took band class, jazz band class, and my favorite class of all - choir.”

Brossman pursued those some opportunities at Wheeling Park High School where she took part in theater and choir among other programs. She believes the school system provides the best in academics, athletics and fine and performing arts. Brossman also has some words of advice for the students of Ohio County Schools.

“You are not limited to one interest, one talent or one future,” She said. “Within this public school system, you are provided unlimited resources, so take advantage of them while you can! Try and fail! The sky is the limit. Among the trials, you just may find yourself with a newfound confidence to take on a hurdle you never imagined yourself surpassing. It is within the walls of Triadelphia Middle School that I began growing into a well-rounded human who was ready to take on a life in Wheeling and beyond.”

“Ohio County Schools can compete with the best of the best when it comes to the arts, and this all began for me at Triadelphia,” Brossman added. “I received my first solo here, and it was no question whether or not to continue at the high school. I furthered this passion for music in college where I was a member of an a cappella group and also worked part-time at a Broadway theater. I truly never would have imagined my life following this path. From the bottom of my heart, I would like to encourage TMS students, and all Ohio County Schools students, to enter every day with an open mind.”