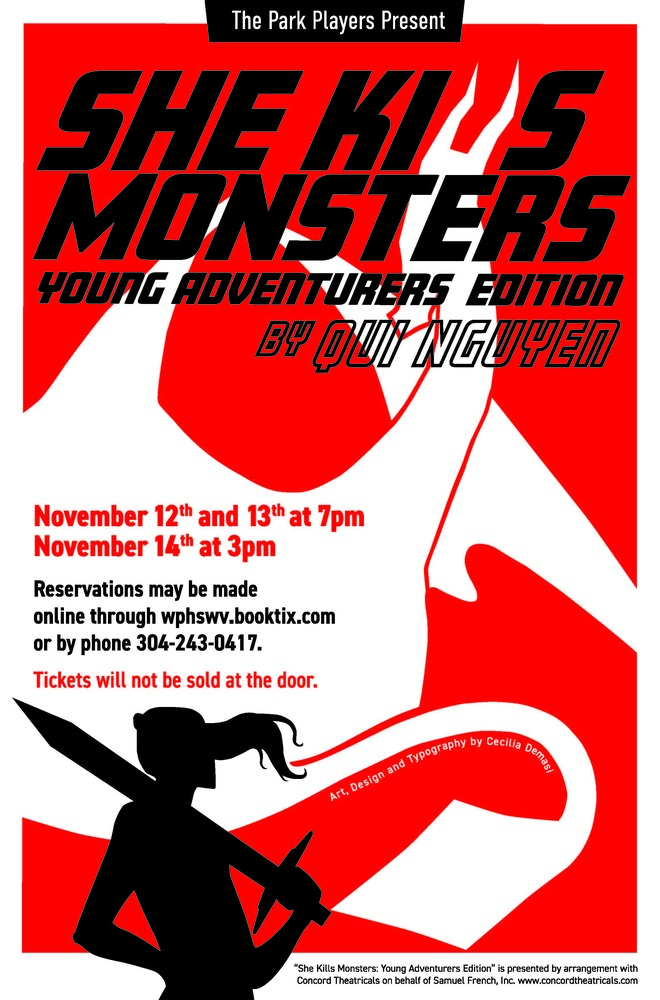 The Wheeling Park High School Park Players will present She Kills Monsters Friday through Sunday, November 12 -14 at the J.B. Chambers Performing Arts Center. The curtain goes up at 7:00 p.m. on Friday and Saturday and 3:00 p.m. on Sunday. Tickets are $13 for adults and $7 for student tickets. There will be use of strobe lighting effects in this production and the content of this production may not be is not suitable for children under the age of 13 years.

She Kills Monsters, set in Ohio in the mid-90s, tells the story of Agnes Evans, a teenage girl grieving her recently deceased sister. The Evans sisters never were especially close, but after Tilly’s death Agnes finds a notebook containing a game scenario created by her late sister. She discovers that Tilly was a well-known Dungeons and Dragons player, and that she was passionate about fantasy gaming. In order to unlock more secrets about her mysterious young sibling, Agnes recruits a “dungeon master” named Chuck to help her understand and grieve Tilly. Along with a motley crew of demons and fairies, Agnes learns to slay gelatinous cubes, Bugbears, five-headed dragons, and her grief. She Kills Monsters is a surprisingly sweet tale of friendship, loss, and acceptance.

The cast for this year’s play is composed of 13 of Park’s most talented students. Leading the cast is Eliza Aulick in the role of Agnes, followed by Stephanie Ebbarb as Tilly and Wyatt Andrews as Chuck. The cast of humans are joined by demons and faerie creatures such as Harper Aulick as Lillith, Towne Moores as Kalliope, and Charlie Mattingly as Orcus. Aliyah Pelley plays the best friend, Vera and Dylan Hunt is Agnes’s boyfriend, Miles. Taylor Andrews and Melody Campbell play evil cheerleaders. Rounding out the cast in various roles are Ayden Cottrill, Addy Perks, Logan Fraizer, and Braeden Keen.

Eliza Aulick, lead of the production, remarks, “This has been one of the most fun shows I have ever been a part of because it is so different. We have learned how to fight on stage and have had so much fun as a cast putting together this whirlwind performance.”

The assistant director for the production is Aidan O’Hare and stage managers are Kaden Cunningham and Maggie Fuller.

Park Player performances bring hundreds of people from the community together to experience the creative spirit of their talented actors and technical crews. It is their hope that they can count on your support.

Tickets can be reserved by calling the theater at 304-243-0417 or by ordering online at wphswv.booktix.com/ Tickets are on sale now and will not be sold at the door. You won’t want to miss this one-of-a-kind production!