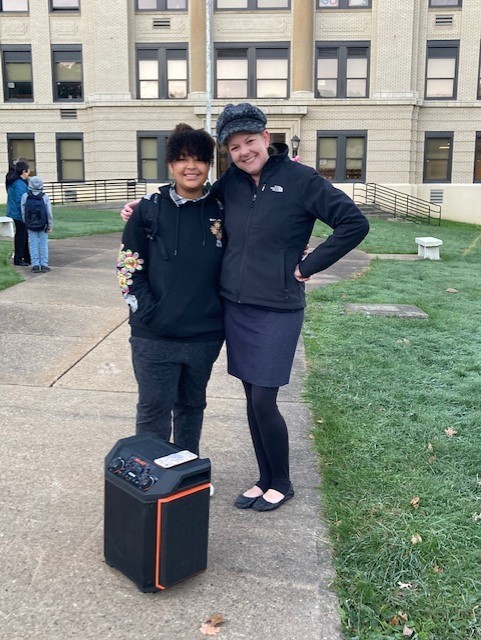 Triadelphia Middle School students arrive to an enthusiastic musical welcome to begin every morning thanks to teacher Amy Dlesk.

Each school day, Dlesk wheels out her sound system to the sidewalk in front of the school, and she cranks up today’s biggest hits and long-time classics. She sings, she dances, and she greets students getting off the bus and walkers making their way to the school. It’s nearly impossible to not smile when seeing her welcome Raider students to the start of the new day.

Dlesk said she can’t take credit for the idea of playing music for students as they arrive at school. She said TMS physical education teacher Kim Martin played music for students returning to school for the first week of the new school year in previous years. However, when Dlesk was assigned outside duty for the start of this school year, she decided to pick up where Martin left off, and she now plans to do it throughout the entire school year.

“I do it every day because music makes me happy,” Dlesk said. “If I have to stand on the corner every day from 7:45 to 8:20, I’m going to bust a move… And, I feed off the kids’ energy. I think that what I’m doing is making the kids happy, and it carries over into the classroom. It’s very positive.”

Dlesk first became a teacher for Ohio County Schools in 2004 when she was hired as a social studies teacher at Bridge Street Middle School. She remained in the position until her resignation in 2012. Dlesk returned to the school system in 2017, and served as a countywide substitute for three years. Dlesk was hired as Triadelphia’s world language teacher in 2020.

Dlesk said her music and moves have impacted people beyond the students and staff members of Triadelphia Middle School. She said she now knows parents, and pets, that she wouldn’t otherwise.

“So many people have their dogs in the car, and I know the names of the dogs,” she as she laughed. “I know parents of kids who aren’t even my students. They wave, and that inspires me… I once had to take a day off because of an appointment, and a parent saw me (outside of school). He said ‘I was looking for you at school today.’ It’s amazing how many people have noticed.”

Dlesk said the weather is not always accommodating, but she will not seek shelter. She even has a “rainy-day” playlist that includes songs that specifically mention the sun or sunshine. She said dancing on cold days warms her up. Dlesk does it for her students, and she doesn’t plan to stop.

“I play the music because it is positive and motivating,” she said. “Its brightens the mood every day. The students are the reason I’m here. It’s for the kids. They keep me going. I love the interaction, and I’m trying to radiate positivity. If I can make someone smile, I’ve had a good day.”