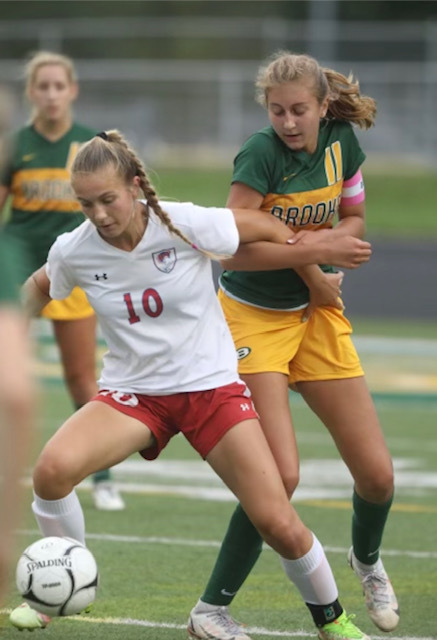 Wheeling Park High School girls’ soccer standout Merritt Delk is having a record-breaking season, but it’s the team’s success that truly drives her.

The talented sophomore scored Park’s only goal in its 1-0 sectional championship victory over Morgantown Wednesday at Wheeling Island Stadium. The 18-1-1 Patriots will next face Bridgeport High School at 5 p.m. on Oct. 28 at Brooke High School in the regional championship. Delk said she was pleased to score the goal that sealed Wheeling Park’s sectional title.

“It felt pretty good,” she said. “It happened early in the game, so we had to play well defensively, but we made it.”

Delk made Wheeling Park girls soccer history on Oct. 14 when she broke the school’s single-season scoring record. She scored her 36th goal of the season at home as Park downed Weir High 8-0 pushing her goal total past the previous single-season record of 35 set by Patriot Brianne Basilone in 2001.

Delk is now closing in on another milestone as a Wheeling Park girls soccer player. With 73 goals in her first two seasons, she’s nearing Park’s all-time goals record of 104. At the pace in which she’s scoring, Delk is likely to become the school’s all-time leading scorer prior to the end of her junior year.

Delk admitted that being the team’s all-time goal scorer would be a wonderful accomplishment. However, it’s simply not a priority for her. Delk said she and her teammates are focused on winning a state championship this season, and she has lofty goals for her junior and senior seasons.

“It’s nice, but it’s a little nerve wracking because you want to be better each year,” she said. “We definitely have a chance (this year) because we’ve grown as a team, so I’m pretty optimistic.

“I just want to win three more state championships,” Delk added. “That’s the best feeling. The goal is to win four state titles. The feeling last year with my best friends was indescribable.”

In addition to soccer, Delk is also a member of the Wheeling Park girls basketball, tennis and track teams. She said soccer is her favorite sport, and she looks forward to playing soccer at the collegiate level.

Wheeling Park High School Girls Soccer Coach Carrie Hanna said she is proud of Delk for her record-breaking sophomore season. She said Delk is a true competitor who is focused on winning, and she looks forward to seeing what the Patriot girls soccer team will accomplish going forward.

“Merritt Delk is a tremendous example of what you can achieve when you set goals and have the right focus, attitude and effort every day to work towards accomplishing them,” Hanna said. “She is one of the most driven and competitive student athletes I have ever coached. To break a 20-year standing record takes not only a special individual, but a very special team, program and culture that pursues the highest standards of excellence. I look forward to witnessing many more accomplishments of Merritt Delk and our Wheeling Park  Girls’ Soccer program.”