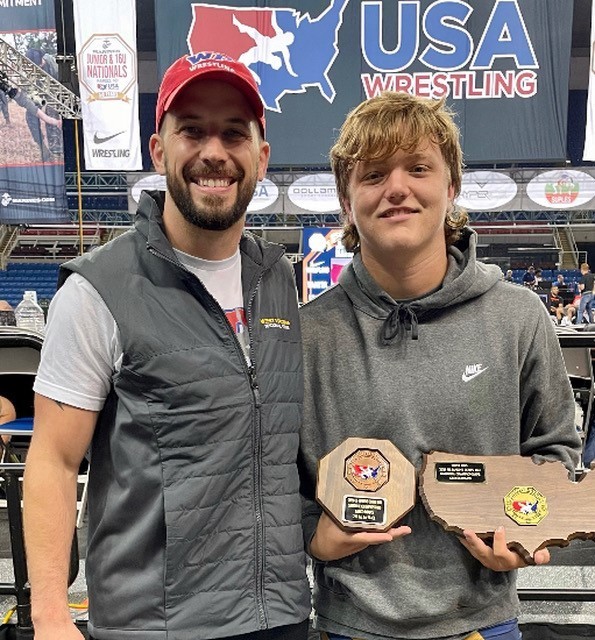 Wheeling Park High School’s Erick Brothers, Jr. has accomplished more on the mat than most high school wrestlers could ever imagine. And, he’s just entering his junior year as a Patriot.

Brothers is a two-time state champion. He claimed the West Virginia Class AAA 182-pound title as a freshman and the 220-pound championship this past April as a sophomore. Just days after winning his second state title, he traveled to Virginia Beach, Va. where he placed fifth in the 220-pound division in the National High School Coaches Association Wrestling Tournament. Most recently, he placed third in the 220-pound division at the United States Marine Corps 16U Nationals Greco-Roman tournament held July 16-23 in Fargo, North Dakota’s FargoDome.

During that national competition, Brothers took part in both Greco-Roman and freestyle wrestling. To place third at the national level was quite an achievement considering Brothers had never taken part in either of those forms of wrestling prior to the tournament.

“It was my first time for freestyle or Greco so to place that high felt great,” Brothers said. “My goal going out there was to get some good matches in. So, when I placed it was amazing.”

Brothers began wrestling at age four after being inspired by his favorite WWE wrestlers. He credits Wheeling Park wrestling coach Brian Leggett for inspiring him to succeed on the mat and in the classroom. Brothers said people often mention to him the success he’s experienced in just two years of high school wrestling, but he said he has a lot to accomplish in his junior and senior years.

“The last two years with coach Leggett have been great,” he added. “We’ve formed a good bond, so I’m excited for the next two years. He pushes me every day to be the best student athlete I can be. I couldn’t ask for a better coach.”

Brothers has already decided that he wants to pursue a college degree and wrestle at the Division-1 level. His favorite subject is history, and he said establishing his college goals motivated him to become a more focused high school student.

“I’ve really picked things up (academically),” Brothers said. “I’m going to keep my grades up because I’m planning to go to college. I’d love to go to a big school. That’s my dream. I’d like to go to a college in the Big Ten or the Big 12.”

Wrestling isn’t the only sport in which Brothers excels at Wheeling Park High School. He’s a starting linebacker on the Patriot football team after earning that starting spot as a sophomore. As he does in wrestling, Brothers has lofty goals for himself and his team.

“I want to win a state championship in football too, and I want to have the most tackles on the team,” Brothers said. “I feel we will be really good. Our defense will hold things down. We have young guys on offense, but they will hold their own, and we will be good this year."